“How can anyone bring a child into this world?”

Have you ever heard someone say those words, or perhaps said them yourself? In many ways that sentiment is understandable. The world is a harsh place, full of potential threats and abuses and hurts. Full of prejudice, division, and evil. Life is fragile with no guarantees of tomorrow. That is a lot of uncertainty to take on if one is going to be a parent. To be responsible for another life in a world where all you have to do is turn your back for a second and your child could vanish.

It is this very fear that the horror/suspense film A Quiet Place confronts. On the surface it is a movie about a world inhabited by monsters (perhaps the result of an alien invasion) who are blind, but have an extremely heightened sense of hearing. The smallest sound could immediately attract them, throwing you, and anyone near you, into grave danger. The tagline of the movie is, “If they hear you, they hunt you.” It is in this environment that a family is attempting to survive together.  They’ve succeeded so far by living off the land, settled on a remote farm. With few, if any, people around them, the potential for sound is much more controlled.

The parents have created an elaborate system of silence. The father (played by John Krasinski who is also making his directorial debut) has created paths around the farm for the children to walk, lined with sand that will dampen any sound. They primarily live in the barn now because the old wood floors in the farmhouse are too creaky. Their eldest child is deaf (played beautifully by Millicent Simmons who is actually deaf) which provides a new blessing since the family all knows sign language and are able to communicate without speaking. Much of the film is silent, the dialogue and soundtrack are very limited. There in an ominous tension that pervades the film, but which is interwoven with sweet moments of the parents (made more believable by Krasinski and Blunt who are married in real life) connecting with their children and attempting to help them have semblances of normalcy. They are a loving family in a traumatic situation who are doing their best to live as a team.

As the film progresses you realize it is about much more than blind monsters, it is a metaphor for the fears of parenting. The setting of the story amplifies the reality that parents can never control their child’s every move.  Children will inevitably knock something over by accident. Even when you create literal paths for them to walk, they will veer off it. They will disobey and fail to understand the urgency behind their parents’ rules. They will perceive the world and have feelings that their parents will not understand or did not intend. The “horror” of A Quiet Place is the fact that it is impossible for parents to protect and control their children all the time, despite how much they love them or are trying to give them everything they need to live well. The frailty of the children is so keen. Beginning with the unpredictability of giving birth, to a newborn who needs to cry (Emily Blunt has some spectacular scenes here), to a pre-teen who is not always in control of her emotions. As an audience member you feel the parents’ anxieties and helplessness deeply.

And yet that is not all we are shown. As the suspense heightens, the children are separated from their parents forcing them to rely on their own wits and on each other to survive. As much as the kids are incredibly vulnerable, they are also profoundly resilient. We see flashes of deep emotional insight as they understand more than their parents expect. They are able to think on their feet and make connections that reveal they were listening to all the careful instruction. They are able to work together as they have seen their mom and dad work together. And what seemed like the greatest vulnerability of the family becomes their greatest strength. It was when the parents did not have perfect control that the kids grow and become stronger. 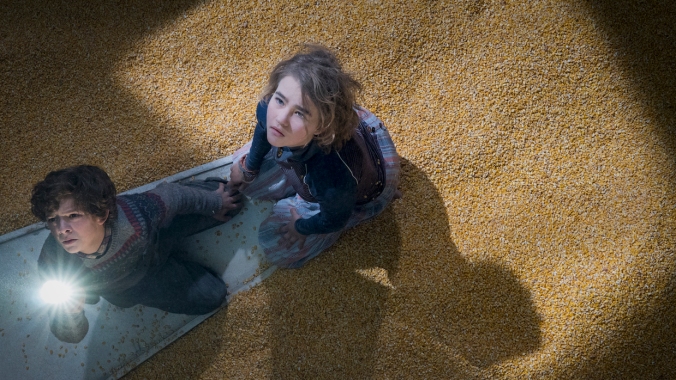 A Quiet Place is ultimately a heart wrenching and hopeful picture of family. The world is a very scary place, but as the book It’s Not Too Late by Dan Dupee describes, being the perfect parent is not what kids need to be healthy. Kids need parents who love them, are involved with them, and who also allow them to experience life’s many facets. Sometimes the things we fear the most for our children, experiencing pain and unhappiness, are exactly what they need to become compassionate and resilient adults.