Have you ever had to practice tough love? Have you had to say or do the hard thing in an effort to get someone’s attention and try to keep them from making a bad decision? Did they thank you for it, or did they think you were just out to get them and make their life miserable?

The exile of the Israelites into Babylon is a part of Old Testament history that doesn’t get a lot of press. How many sermons have you heard preached about God evicting His people from the Promised Land and giving them over into foreign rule? It’s not a particularly pleasant or easy topic to tackle. Part of what makes it so difficult is the harshness of an event that makes it seem as though God was giving up on the people and sending them away out of frustration. Did God reach His limit and have to get them out of His sight? 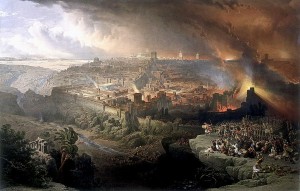 We should first note that God never lies in wait so He can spring punishment and death on His unsuspecting children. He warns the people in Leviticus 26, before they even enter the Land of Promise, that if they disobey the Law and the covenant they have made then He will remove them from the land.  That was nearly 700 years before the exile occurred. Then God sends several prophets to warn the people that their violence and exploitation can’t go unnoticed and judgment will be imminent unless they turn their hearts back to following the Lord. God isn’t just talking a big game when He says,

8 The Lord is gracious and compassionate,
slow to anger and rich in love. – Psalm 145:8

When the exile finally happens, God makes it very clear why it’s occurring. The land was full of violence and bloodshed, the people had been worshiping other gods for centuries, and they had forgotten about the poor and there was injustice and inequity throughout their society. They were attributing their prosperity to the pagan gods and they thought that God didn’t see them worshiping others gods in the very middle of God’s temple. Hosea frames it as a marriage between God and Israel in which Israel has been wildly unfaithful and promiscuous.

5 For their mother has played the whore;
she who conceived them has acted shamefully.
For she said, ‘I will go after my lovers,
who give me my bread and my water,
my wool and my flax, my oil and my drink.’
6 Therefore I will hedge up her way with thorns,
and I will build a wall against her,
so that she cannot find her paths.
7 She shall pursue her lovers
but not overtake them,
and she shall seek them
but shall not find them.
Then she shall say,
‘I will go and return to my first husband,
for it was better for me then than now.’
8 And she did not know
that it was I who gave her
the grain, the wine, and the oil,
and who lavished on her silver and gold,
which they used for Baal. – Hosea 2:5-8

In light of this reality, let’s put ourselves in God’s shoes for a moment. I’m going to use a metaphor that is intense and may hit close to home for many people. My hope is to represent as accurately as possible how deeply God is invested in us and how much sin destroys us and robs us of life. I hope that God’s pursuit of us becomes that much more real and powerful.

Imagine the person about whom you care the most and in whom you’ve invested the most. You’ve poured your whole life into this person…now imagine they have become a drug addict. At first they brought their dealers into your home and gave away all of your belongings to those people. And now they’ve run away and are living in squalor in the crack house. They stole your car, emptied your bank account, maxed out all your credit cards, and they keep saying, “my dealers, these are the people that have my back and know what’s best for me. They’re the ones I can trust.”  How would you feel?  You’ve given them everything and only want health and flourishing for them, and they reject you in order to destroy themselves.  How long do you keep giving to them? At what point do you give up?

The exile is God’s national intervention.  God had to physically remove them from the environment where they had enacted all of this destruction.  You can’t get clean and sober and then keep living in the crack house and think you’ll stay clean. You have to change all of your old habits and be stripped of everything that was enabling you to stay in active addiction. God was willing to show them tough love and risk His children resenting Him and yelling, “Why are you doing this? You’re such a bad God, I hate you!” (Ezekiel 18:29-32) Rather than the exile being evidence that God had given up on them and was disowning them, it meant that He would never give up on them and would do whatever it took to protect them from themselves.

If you feel like you or someone you love very dearly has become a lost cause, don’t lose heart. We believe in a God that will never give up and who goes to great lengths to save people who are hell-bent on their own destruction. Even when we repeatedly reject Him and think we’re out of reach, we can never outrun the love of God.

38 For I am convinced that neither death nor life, neither angels nor demons, neither the present nor the future, nor any powers, 39 neither height nor depth, nor anything else in all creation, will be able to separate us from the love of God that is in Christ Jesus our Lord. – Romans 8:38-39 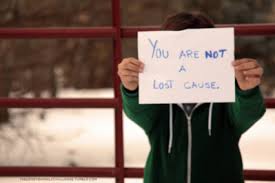 If this has struck a personal cord with you, know that you don’t have to process it alone. Sin puts us and people we love in isolation and trapped in shame, and Christ desires to bring us out of darkness into healing and community. Please seek out a pastor, Christian friend, or counselor and invite Jesus to bring new levels of healing and restoration in your life.