I was on an emotional rollercoaster. This weekend the Anglican Diocese of Pittsburgh elected a new bishop at a Special Convention and I was front and center. It has been nearly 20 years since we have needed to hold an election, and we’d never done it as an Anglican Diocese. Our motto since we first found out five months ago that we would be holding the election was, “Prayer, not politics. Discernment, not a search.” Our goal was not to make this about angling and popularity, but to keep God’s wisdom and guidance at the forefront each step of the way. And incredibly, that’s what actually happened.

Friday night before statements and Q&A from the six nominees we prayed over them and asked the Lord to give us open minds and hearts, to relinquish preconceived notions or opinions and to hear from the Spirit as they each spoke. Each of them did a wonderful job. It takes a great deal of vulnerability to consider being a leader. You and your family have to commit much thought and prayer to that potential transition, and you have to make yourself open to other people in sharing about your experiences and vision for the future. You put yourself on the line in a unique and public way that takes courage and a willingness to make yourself available to Christ’s leading. I was so impressed by the way that each of the nominees opened themselves up to the Diocese and to the Spirit’s movement. It was evident that it was motivated by a desire to serve the Body of Christ, not self-promotion. 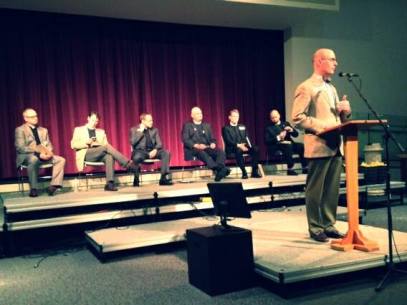 Saturday morning before the Special Convention officially convened, we celebrated Communion together. It wasn’t just a formality because that’s what Anglicans are supposed to do, it was beginning the day with putting Christ on the throne. It was receiving Christ’s body and blood and as we all were reminded that we are One with Christ, seeking to be one with each other. I found myself praying as the whole Convention was taking Communion, “Jesus make us one Body in Your Body. Make us one as you and the Father are One.”

Then we cast the first round of ballots, and it was inconclusive. A strong consensus was not emerging right away. And so we continued in prayer, and worship through song, and reading scripture in between each round of ballots. We engaged in this process for several hours and for several ballots. At one point we paused all together to spend time in prayer over rising violence in the Horn of Africa and for church leaders in the region. Each time a ballot would come back split, people did not get angry or start berating each other to get on board with their personal choice. There was an incredible spirit of openness and sensitivity to the Spirit in the room. It was truly the Body of Christ seeking the Lord together, being willing to make a huge decision based on the Lord’s leading. 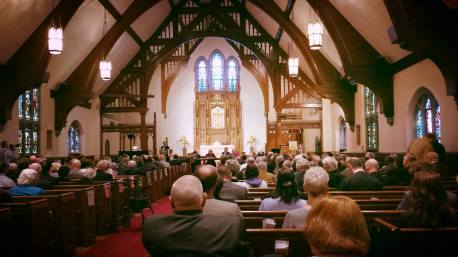 Multiple candidates withdrew as the balloting continued. Each time this occurred, they were received with a standing ovation. There was no sense that they had failed or were incapable. Their withdrawals were deeply selfless and marked by a desire to respond to God’s will and to prevent confusion or conflict. And the standing ovations were expressions of sincere gratitude for their time and investment, an affirmation that their role mattered greatly in getting closer to discerning the person God was calling. This was one of the most moving aspects of the election for me. Watching highly capable and gifted men choose to humbly serve the Church with their willingness to lead, and their willingness to hear from God that this was not the leadership role for them at this time. Each of them made decisions based on what was best for God’s people in Pittsburgh, not based on their own striving or ambition.

When the consensus was reached it was wonderfully clear that this was the person God was calling to be bishop. As all of us participated with the Spirit throughout the process, Christ honored our openness with clarity around His chosen servant. While the long day was emotionally draining, I had a deep assurance that this was the Lord’s choosing and we were in step with God’s will. It was one of the more profound experiences I have shared with the Body of Christ. A process marked by prayer and comprehensive discernment, civility, listening, and a consideration for the good of all. I am thankful to serve with people who seek the Lord so diligently. I was part of something beautiful and I was changed.