How have you been feeling about politics lately? Fearful? Hopeful? Angry? Energetic? How many times in the last four years have you heard some version of, “America is more divided than it has ever been”? If this very common sentiment is true, and has been for a while, then perhaps the only way to fix it is to do something different. What do we do differently, though, and whose responsibility is it to be different? It’s all too easy to assume that the next generation will bring change, but if Apple’s new documentary Boys State is a signpost of what’s to come, we may want to create a little more urgency in the here and now. 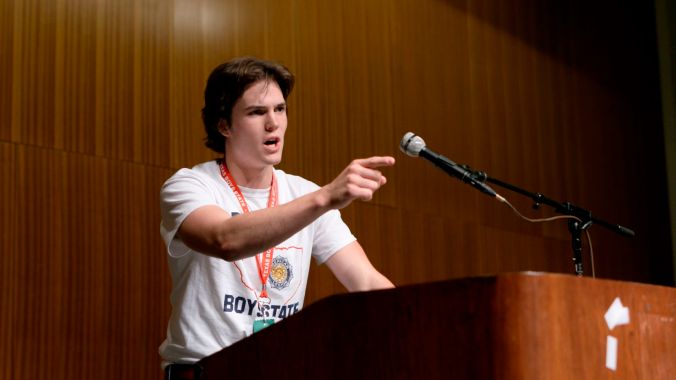 Boys State, from filmmakers Amanda McBain and Jesse Moss, won the U.S. Documentary Grand Jury Prize at the 2020 Sundance Film Festival, and documents the 2018 Texas Boys State program. Every year in every state the American Legion runs a leadership development experience for male and female high school juniors. The goal of the program is to educate young people on civic engagement and often includes perks like college credit or valuable college scholarships. The film opens highlighting some of the program’s more infamous alumni like Bill Clinton, Dick Cheney, and Rush Limbaugh. Each young person is sponsored by their local Legion and are usually the sole representative of their high school. Following the leaders of the youth of our nation, what an incredible opportunity to see what they stand for and how they will engage in the political process! The issue is, once this week at the Texas state capitol begins to unfold, it’s not that different from what we see on our national political stage.

Maybe we’ve grown accustomed to seeing the survivors of the Parkland shooting standing behind podiums or Greta Thunberg addressing the world’s leaders, but the displays at this Boys State more resembles the worst comment threads on Facebook. Are abortion and gun control the most pressing concerns on the average 17-year-old conservative Texan? The answer, from the subjects themselves, is no, but it’s what they think they’re supposed to talk about. They may not even be able to tell you why, but they definitely think it will make them successful, popular, and, more importantly, elected. One young man even goes as far to admit that he believes the exact opposite of what he said in a debate because he knows it’s what people want to hear. They’re all getting ready to enter college or the workforce. Many probably do think often about the world they’re inheriting. Some of them probably have challenging family lives rife with relational and economic obstacles. Other’s minds are filled with dreams of tricked-out pickup trucks and queries as to who among them can do the most pushups. But you ask them to talk about politics and the only place their mind can go is the 2nd Amendment. 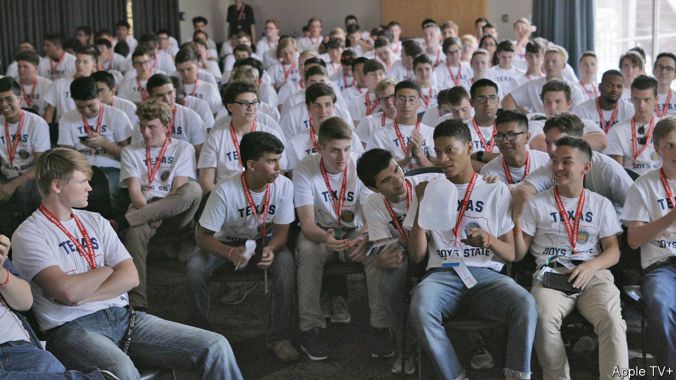 In this environment it’s hard not to notice the outliers. In the documentary, it is a young man named Steven who enters the narrative in his Beto t-shirt telling stories of his conversion to the political sphere by Bernie Sanders. Later we find out that Steven helped stage the “March For Our Lives” march in Houston. It’s not his progressivism that makes Steven different, though. He also knows in order to win the coveted highest office of Boys State Governor, he must reach across the aisle. When asked the primary role of a politician, Steven answers “public service.” He says again and again in his speeches, and during his quest to get the signatures needed to be on the ticket, that governing means he represents everyone, not just those who agree with him. The film spends a lot of time watching Steven go conversation to conversation, handshake to handshake, lunch to lunch, asking the same question, “What do you care about?” He’s not interested in changing his convictions to win, he wants to build a representative government.

The doc might look upon Steven with a tinge of partiality, but what if all of the other boys acted this way? What might be different about the platforms they produce or the races they run? The policies and campaigns end up looking all too familiar, though. There are guys who jump to impeachment at the slightest whiff of disagreement while others attempt a full-blown Texas secession just to be cool (the previous year’s Boys State voted to succeed and made headlines). There’s mudslinging, social media smear campaigns, and petty or goofy congressional resolutions.

If we are expecting the next generation to be different, then one Steven in a sea of 1,100 future politicians aren’t great odds. We may need to take some responsibility for what this next generation is absorbing. Think about someone like John Lewis who did have the burden of change thrust upon his shoulders at a young age, but he clung to his elders (though many weren’t much older) for an example. Now how many young people will vote for the first time in 2020 because they learned of his legacy as the world eulogized him? Lewis is encouraging more Americans from the grave than many who currently hold office. “My friends, let us not forget that we are involved in a serious social revolution. By and large, American politics is dominated by politicians who build their careers on immoral compromises and ally themselves with open forms of political, economic, and social exploitation,” Lewis said in front of the crowd at the March on Washington in 1963. Boys State helps us see that we simply cannot wait to see what progress the next generation will bring or how they’ll be different. We have to be different right now or they never will be.