A young woman nervously shifts after blurting out this news, waiting for her boyfriend to respond.  To her relief, he’s happy and excited. He loves her and is committed to her and to their child. Soon afterwards he proposes and they sneak off for a simple wedding. Sounds pretty unremarkable. This young couple who are poor and living in the same rural community have fallen in love and want to build a life together. Except that it’s 1958 in Virginia and he’s white and she’s black, and it’s illegal for them to marry.

Thus begins the film “Loving” which tells the true story of Mildred Jeter and Richard Loving, an interracial couple who were behind the Supreme Court case to legalize interracial marriage. Their struggle to live in their home state as a married couple and family became a turning point court case during the Civil Rights Movement. A landmark ruling that broke down racial barriers and changed our country forever.

The film quietly asks a very powerful question, “What kind of people change the world?” On the surface, the Lovings are not a splashy and charismatic couple. The film’s director Jeff Nichols pointedly depicts their deep normalcy and simple desire to be a healthy family. Both Mildred and Richard are poor and not college educated. They seemed to be kind and friendly people, but they largely kept to themselves and were by no means on a crusade of epic proportions. Their path to world-changing was marked by small decisions based on what was in front of them at the time.

The first decision was to marry and honor their relationship and child with fidelity and love. Then when they were forced to leave the state or be jailed, they moved to DC and did the best they could to build a home for their growing family. But they missed their relatives and the peace of the country, and wanted their children to be in a safer environment closer to family. So when Mildred is presented with the suggestion to write to the Attorney General, Bobby Kennedy, she takes a chance to ask for help. From there it was small steps of meeting with a lawyer, continuing to communicate with him about their case, being photographed for Life Magazine, and hoping that things could be better. We see Mildred in particular gain a growing sense that their case could benefit many other people and she exudes a quiet optimism that change could be possible. On the day that their case is heard before the Supreme Court, the Lovings weren’t in attendance. The day in court is a very minor part of the film, Nichols choosing instead to focus on the family at home going about their normal lives together (but still nervously waiting for the phone to ring.) Because of their persistence to believe the life they wanted together was possible, 9 years and 3 children after they first married they are able to see an outcome that changed their lives and opportunities for countless other couples since. 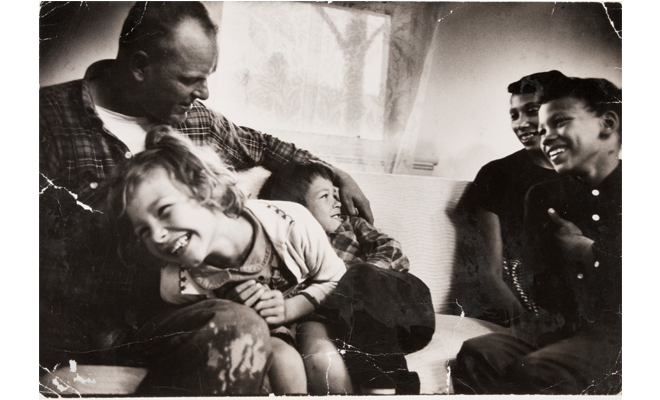 Who comes to mind when you think of people that changed the world? Is it famous people in history books? People that have biographies and Broadway musicals written about them? For most of us, we don’t immediately think of the ordinary people around us in our daily lives, and we probably don’t think of ourselves. But world-changing doesn’t happen all at once when we decide it should, it happens gradually when people begin taking small steps to do what they can in their realm of influence. Richard and Mildred didn’t decide in 1958 that they wanted to catalyze a Supreme Court case and force the government’s hand to change federal legislation. They decided that they wanted to do right by each other in their immediate situation, and then went from there.

I once heard a speaker at the Jubilee Conference talk about Daniel in the Bible and the long road of faithfulness over our lifetimes. Daniel is known for facing off with lions and having God save him when he was thrown into a den of the ferocious beasts. What we don’t often think about is that Daniel was in his 80s when that happened. He’s known for a spectacular event that every Sunday school kid has heard, but we don’t write songs about all the normal years he spent in Babylon quietly honoring God every day with the work and opportunities that were before him. Scripture is filled with other ordinary people who were under-qualified and unremarkable and yet who were invited to join God in doing spectacular things.

You may or may not have to chance to do something that changes history in a way that other people will notice and remember, but maybe being extraordinary isn’t the point. Life is full of unexpected twists and turns, unforeseen challenges and gifts. Each day is an opportunity to honor God in our decisions and relationships. Only God knows where it might go from there.

“God must love ordinary people, He made so many of them.”

One thought on ““Loving” – Quietly Changing the World”