It is Star Wars week, as in the week that Episode VII: The Force Awakens is hitting theaters and has already been destroying presale records…destroying them like they came with a tiny port that could succumb to a couple of well aimed proton torpedoes. Not only that, but all of the coolest online sources are featuring special Star Wars articles and videos to add cars to the hype train. And with new Star Wars excitement comes fresh fear that the new one will be on par with the dreaded prequels. We know that fear is the path to the dark side…fear leads to anger, anger leads to hate…fresh hate for the prequels.

What does hate lead to though? It only leads to suffering so I offer a deep, overly thought-out search for the silver lining of George Lucas’s long-time loathed, CGI extravaganza. I will offer a defense for some of Lucas’s most questioned creative choices as I attempt to step into his mind. I won’t be going into the casting of actors or dialogue or Lucas’s decision to do everything in CG. Though, I do think he gets too much heat for most of that, especially the CG. If Episode I was made the same year as Avatar they would look nearly identical. Mostly, however, I’ll be asking a lot of whys and what ifs about the story. When thinking about the prequels the most important what if might be…what if we were supposed to hate the prequels?

Where do we begin? How about the OG trilogy! What do we know about the state of the galaxy both before and during the original episodes? We know that there was once a great peace-keeping entity in the galaxy known as the Jedi. The Jedi were the most powerful weapon in the entire universe. With their mastery of the light side of the force along with their commitment to a simple, unified life, they were the perfect guard against evil of any kind. Then something happened and we are left with only Obi-Wan and Yoda.

Knowing that, what is the prequel trilogy really about? The most exciting promise of the prequels for many was that we would go on the journey of Anakin Skywalker transforming into Darth Vader, but I will argue that this is just a symptom of a larger narrative unfolding in the galaxy. The prequels are largely and mostly about the fall of the Jedi. Not just Luke Skywalker, but the Jedi as a whole are the “new hope.” The finale of the entire original trilogy is a “return of the Jedi.” So it makes sense that the mighty Jedi’s fall would be the main task the prequels had to accomplish.

Therefore another question to ask leaving the prequels is did George Lucas accomplish this? I argue yes, and how he did it not only makes sense but appropriately should leave you hating the movies themselves because of the story they tell. Why did the Jedi fall? In the films, the events that surround it may seem complicated, but I believe they boil down to three main points.

The Sith could have struck anytime. The master plan of the eventual Emperor didn’t start with the birth of Anakin Skywalker. The Sith weren’t waiting for the-kid-that-would-be-Vader to come into the scene before they struck. They had pieces moving for decades. So what made the time of the prequels the perfect time for the Sith to make themselves known?

Imagine being the Jedi, the greatest force the galaxy knows. You are loved by everyone that loves good. Your bodies and minds are beacons of the strongest power in the galaxy which means no problem is insurmountable. Spend hundreds and hundreds of years in that role and you are bound to fall asleep a little bit, right? The prequels are filled with references to the Jedi’s vision being clouded and slowly throughout the story we find out times when elaborate things were happening right under their nose.

We see the Jedi’s arrogance in little ways. Episode I begins with them sending obvious Jedi into a situation that would only become exacerbated by Jedi being involved. Why weren’t they stealthier? Qui-Gon is perhaps the personification of this brash arrogance. We see it in his inability to listen to the Jedi council about not training Anakin and we see it in the saber battle that leads to his tragic death. He and Obi-Wan were barely handling Maul together, why did he rush in to fight him alone? The events of Episode I are a shot in the mouth of the Jedi and they spend the rest of the prequels a step behind which leaves them vulnerable. 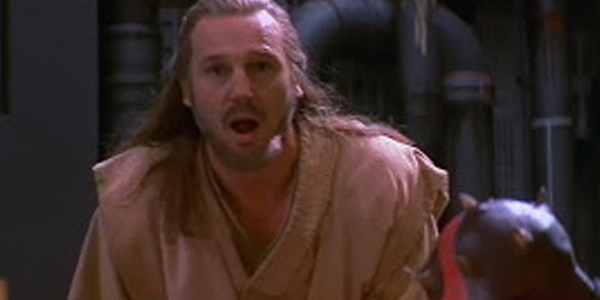 The Jedi Were Vulnerable to Bureaucracy

If you are the leader of the Sith, knowing that you’re out numbered and out powered by the mighty Jedi, how do you go about bringing them down? There is no way to match them in a physical battle. The only way is to Olivia Pope them! You make the galaxy stop trusting them. And when the galaxy stops trusting their galactic police, chaos ensues. With the wisdom and power of the Jedi in question after Episode I the senate and therefore the galaxy turn to a political leader and a vast clone army.

This is probably the most relatable and infuriating part of the prequels. Rightfully so, just like here in America, the galaxy had checks and balances to ensure that power isn’t abused. The Jedi probably humbly set this form of galactic government into motion. Then they were arrogant and made a mistake forcing them to be held in check. Yoda alludes to them being deceived and perhaps needing to take a step back. And then the Sith played the political machine like a fiddle because sometimes that machine is driven by idiots.

Bureaucracy is Often Run by Idiots

Jar Jar Binks. No entity in Star Wars lore boils the blood more than this childish buffoon. But what if the prequels are also about learning to hate Jar Jar because he represents the most realistic aspect of government? When everything goes down, it is Jar Jar that has gained the trust of Padme and others. In a time of great suffering, the senate should have been able to cling to the Jedi, but now they were clinging for the government to save them. This leads to Jar Jar having real, political influence.

The prequels are about the fall of the Jedi and they are also about the rise of an oppressive government. The Jedi are personifications of wisdom, truth, and goodness and the government, personified by Jar Jar and used by the Sith becomes a metaphor for evil, injustice, and lies. Perhaps what is so maddening about the prequels isn’t the movies themselves but the story they tell…a story that is real to our lives, a bad story, a story that is meant to make us hate injustice, a story that is to warn us about getting complacent and arrogant like the Jedi, a story that prepares us for political leaders that will make bad decisions. Ultimately, we are supposed to hate the prequels, the story of the fall of the Jedi, so that when the Jedi finally return we can be filled with uninhibited joy.

One thought on “What if we’re supposed to hate the prequels?”