You may not know what it was like. Football was a huge part of my adolescent and teen years and when I was at my peak in the sport, my junior and senior year in high school, the player that everyone was talking about was Michael Vick. Watching Vick play football in the early 2000’s was like taking in the brooding shadows of a Caravaggio or popping and locking to the sweet beats of MJ. 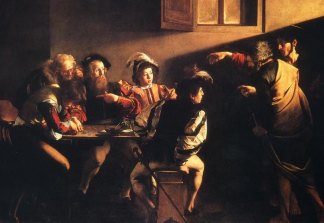 Caravaggio’s “The Calling of St. Matthew”

Here in Pittsburgh we had our Slash, but Vick was changing everything. He changed the definition of the quarterback position, he broke records. Witnessing him weave in and out of defenders and launch the ball down the field made it seem like this was how football was meant to be played or at least this is exactly what God made Michael Vick to do. A football in his hands was like a pen in the hand of Emily Dickinson. My peers bought his jersey and voted him into Pro Bowls. For my generation of young athletes, Vick was a hero.

Was. It hurt when Vick was convicted of dog fighting in 2007. All of a sudden his 1,039 rushing yards that season didn’t matter. His three Pro Bowl selections didn’t matter. He was a bad guy, a criminal, a violent abuser. We would have been fine if Vick just dropped off the face of planet and we didn’t have to deal with him ever again.

But then, in 2009, he came back. He was now an advocate for the Humane Society. He was influential in creating more strict animal cruelty laws and sentences. His new team, the Philadelphia Eagles, chose the Humane Society to be recipients of $50,000 in grant money. And this created a problem.

I wanted Vick to be gone forever. I was fine placing him into the category of fallen hero and never thinking about him again. But he was breaking out of that category. In the words of the Humane Society, “Given the penalties available at the time he was sentenced, U.S. District Court Judge Henry Hudson meted out a strong penalty to Vick. He paid a steep price for his crimes, in addition to serving his prison sentence.” They go on to say, “Michael Vick was a role model for many young people, and he lost everything because of what he did to dogs. His story is the strongest possible example of why dog fighting is a dead end…We realized the potential that Vick has to reach at-risk youth and pull them out of the quicksand of animal fighting.” (Read more about Vick and The Humane Society)

Vick didn’t wiggle out of the crime he committed. He didn’t avoid apologizing. He actively did everything he possibly could on the hard, bloody road to forgiveness. And not just that, he’s trying to dissuade other young people to choose a different path. The truth is that out of this crime, because of his worst moments, Vick has now done more for preventing dog fighting than almost anyone. But do I have to forgive him? 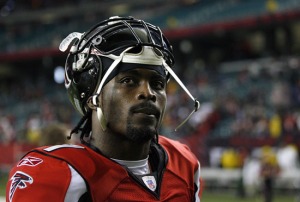 This is a complicated question. I have done a lot of terrible, hurtful things in my life, but it is incredibly possible, terrifyingly so, that I have yet to reach my worst moment. A moment when the deepest, darkest part of my heart that I don’t like to think about or see in the mirror surfaces. So the first part of the answer to that question is, “Am I forgiven?” See the problem with Vick not going away is that now I have to come face to face with what I have been forgiven of.

In the eyes of some, Vick has done something that all of PSA’s and grant money in the world couldn’t atone for, but that is exactly what Jesus’ death on the cross was for. If I can’t give grace to Michael Vick then it is entirely possible that I have failed to recognize my own need for forgiveness. I think about the woman in Luke 7. Jesus says, “Therefore I tell you, her sins, which are many, are forgiven—for she loved much. But he who is forgiven little, loves little.” My sins, which are many, have been forgiven, and because of that I can’t withhold my forgiveness for Vick. I have to recognize that the grace Jesus has given me extends to him.

Don’t think for one second Vick doesn’t realize how blessed he is to be able to play this sport again, and now with the greatest team in the history of NFL no less. Seeing that ball back in this sinner’s hand gives me hope. A hope that passes all understanding. A hope that one day, despite my worst moments, I’ll hold the instrument of my God-given gifts in my hands and create a masterpiece.

2 thoughts on “Do I have to forgive Michael Vick?”